I remember an overwhelming feeling of keen interest to everything around, when I was a little child. I simply could not fall asleep after my mom put me to bed at around nine in the evening. Everything in my inner midst was rebelling, when she softly wished me good night, turned the light off, and closed the door, leaving me in the darkness and quietness of my tiny room. I was thinking: “People lose so much of exciting things and events when they sleep. I don’t want to miss even the smallest thing and the slightest expression of life!”

As a result, I usually did not sleep until midnight or later. Instead of sleeping, I kept laying in bed thinking about various things and visualizing for hours. I had so much fun! I enjoyed the perfect sense of freedom and time that belonged only to me. I could create anything I wished in my mind. I was imagining places and events, thinking of books I’ve read and new things I’ve learnt. I was designing and engineering objects and structures, developing games and planning various experiments. I was choosing to work on these fantasies with my eyes closed or observed the elusive contours of furniture in the murky room, shadowy designs of the wall carpet near my bed, and the window curtains folding into magical shapes. 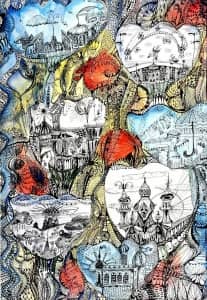 Windows are always very compelling creations. Often, I was getting up from my bed and silently moved closer to the only window in my room. We lived on the fifth and the topmost floor of the building’s corner. Right in front of my window was a very tall and bright street light. It interleaved a large luminous cone into the night’s obscurity, presenting a spectacular opportunity for the observation of the city’s night life to anyone who was ready for an enchanting performance. I was a grateful spectator in this theater. I could watch people walking on the street below unobtrusively, cars and bicycles standing or moving in different directions, and the artistic beauty of the stage set with their constantly changing bushels of clouds, streaming through the darkness of the sky, the crescent growing into the full moon and again disappearing onto nothingness, orbits of the stars, and spectacular fireworks.

I loved to watch people. I was making up stories, thinking about their lives, imagining their thoughts, where they were going, why, and whom they are going to meet. One of my most treasured memories from that time is an image of Santa Claus, walking under heavy rain and carrying his hefty bag of presents one New Year’s night … It was particularly intriguing to think, where his destination would be and what presents he will give away to the lucky children. I was six and I felt very fortunate for the astonishing present and the opportunity of a glimpse into the life’s most sacred and mysterious traditions!

Sometimes, the night was clear and cloudless and I observed the brightest stars, the whiteness of the moon, and colorful flashing lights of airplanes. In those nights every detail on the street canvas was crispy clear, almost as much as it could be seen during the day. A similar effect bequeathed the wavy piles of freshly fallen snow, glittering as myriads of winter light jewels, illuminating everything around. I loved it all and did not want to miss a bit.

I was watching window lights, randomly scattered in the surrounding buildings, ever-changing through the darkness. They appeared as large rectangular stars in various colors of the curtains they had to break through. I was following the trajectories of rain drops and snowflakes, when the large cone of light around the light pole transformed into a circle, giving the impression of an angel’s halo.

Rain can be so different! In the calmness of a misty night, rain was drizzling almost invisibly in the smallest droplets, falling in a glowing torrent as a fainting actress, dropping slowly and gracefully under a brilliance of soffits. In the contrast to a stormy night, I watched how air masses are torn in multiple directions under a sudden blinding lightning followed by the atrociousness of thunder, purring the weightiness of the sky ocean on this little Earth. It was roaring as viciously as a wild animal that had just been caught in a trap, tearing and shredding everything it can reach in desolate despair.

I loved it all! The tranquility of the night and the most unspeakable storm had brought terrific enjoyment to my child’s soul. It was an already conscious feeling of gratitude that I am here, I can observe it, and I have a magnificent chance to experience it all here and now. It was the manifestation of life itself filling me with a tremendous power of creation. I was daydreaming of a magnitude of things, planning the immediate and a far future, forming my whole life in an astounding feeling of love for this life.

Every morning I was waking up with an excitement that the night is over, that life begins anew, and in front of me the whole day of delightful happenings, discoveries, and creations. My dreams and visions about the future as well as the perceived reality could be described in visual pictures. I began to draw. It was a way to express myself in happiness and sorrow, in thoughtfulness and lightheadedness. I perceived drawing and painting as magic that became visible, equipping the vividness of life with a much brightened aura. I loved it all! Explicitly, I loved books. Fine art albums and instructional books brought an especially sacred trembling to my soul getting into my hands, filling me with a new level of freedom and a strong and unstoppable desire to create.